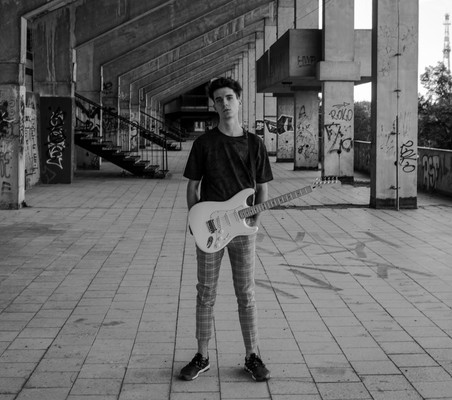 badfocus is an emerging project of a Prague-based producer, composer and multi-instrumentalist Prokop Korb. His music represents an abundant sonic fantasy powered by the endeavour to expand his own musical language.

Despite his young age, badfocus embodies a genuine creative spirit with an endless hunger for new soundscapes, beats and melodies. Despite originally coming from a jazz background, he experiments with various genres such as electronica, classical music, hip-hop, or indie pop. He thus creates a completely unique world in each of his songs, which are freed from genre conventions. The main link between the mixture of genres is the indented emotional impact on listeners. Often dealing with insomnia, it’s mostly nights when badfocus arouses the peak of his creative process, while reflecting on his mental experiences, daydreaming and the outside world.

While listening to badfocus you can hear parallels with artists and projects such as Nils Frahm, Ólafur Arnalds or Bonobo, but you will definitely recognize his original sound that crystallizes with each released song.

Badfocus keeps on composing new music with a relentless dedication and effort which is reflected in the released material and future plans. Since the beginning of this project in the spring 2020 badfocus managed to release his first EP called ep1, debut album wallflower and two series of intimate EPs emerged vol. I and vol. II. Apart from these releases, he also composed his first original motion picture soundtrack new normal for the debut dance film of the Czech National Theatre and is currently working on his first soundtrack for a feature film.

His young age, determination, unconventionality and multi-genre approach undoubtedly foreshadow a career which will be exciting to follow. So, buckle up and get ready for a ride to atmospheric, ambient, yet catchy and unforgettable soundscapes.