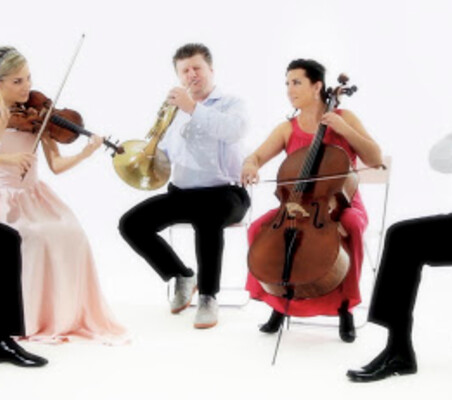 The BABORAK ENSEMBLE was founded by the horn player and conductor Radek Baborák. Its members are bound together by a shared enjoyment of performing music by masters from four stylistically different eras, as well as an enthusiasm for discovering unknown works and the search for peculiar, non-traditional interpretations of compositions either dedicated to or arranged for the ensemble. The core of the ensemble is formed by the French horn and the string quartet that includes Dalibor Karvay – violin, Martina Bačová – violin, Karel Untermüller – viola, Hana Baboráková – cello. This set up has been flexible from the very first concerts and projects, and varies depending on the stylistic and repertoire demands of individual compositions.

The BABORAK ENSEMBLE collaborates with a number of outstanding musical figures, concertmasters and players, members of the Berlin Philharmonic, Munich Philharmonic and Czech Philharmonic Orchestra, including Lorenz Nasturica, Wilfried Strehle, Wenzel Fuchs, Benze Boganyi and Jana Boušková. Kindred Czech ensembles also perform together with the BABORAK ENSEMBLE, among them the Epoque Quartet, and the Clarinet Factory. Part and parcel of the ensemble’s music making is the collaboration with composers, namely Miloš Bok, František Šterbák, Tomáš Ille and Ondřej Brousek.

The ensemble regularly takes part in festivals, including the Prague Spring, Smetana Litomyšl, Mitte Europa, Janáček Festival, Lipa Musica, Grünwalder Musiktage and Concerts in St.Donat in Zadar. The ensemble gives concerts in Japan’s prestigious venues such as the Kitara Hall Sapporo, in Tokyo, Osaka and Mitu. As a residential group, the ensemble performed a number of concerts at St. Agnes Church in Prague. Their last project, ORQUESTRINA, was launched in the sold out chamber hall of the Berlin Philharmonic.

The ensemble has made a number of noteworthy recordings. For the Japanese label Exton, they recorded their debut CD with a selection of compositions by Mozart, Beethoven, Krol and Turner. The album Quattro Stagioni presented Italian music by Vivaldi, Corelli, Donizetti, Sinigalia and Rota, and was awarded the Japanese critics prize. For Supraphon the ensemble recorded compositions by Bohuslav Martinů, Ch.Koechlin and Carl Nielsen. The CD Orquestrina was released by an independent publisher, Animal music, and contains arrangements of compositions by Astor Piazzolla – Histoire du Tango, Ravel – Boléro, and Fauré – Pavane.