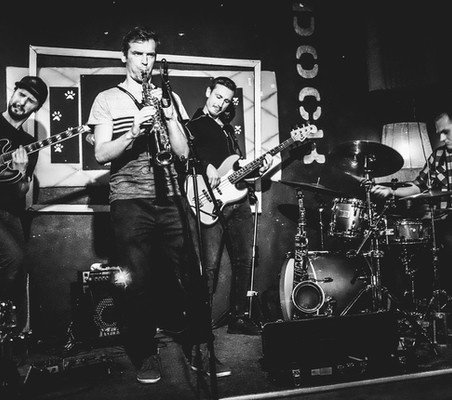 Anything we play we evaluate in terms of originality - our mission is to play music, which we have not heard before. We want the music to be current and catching without compromising an artistic quality of its content.

Despite unusual arrangements or odd rhythms, the compositions still remain songs, each of them with its own world, telling stories, drawing inspiration eclectically from contemporary popular music.

Major part of the music we compose together to be sure that each musical individuality is imprinted right into the songs, which generates the most authentic sound of the band.

The project has been put together by its guitarist Radim Přidal, who teamed with saxophonist Petr Smékal, former classmate from studies at Janáček Academy of Music in Brno, CZ. In drummer Marek Antoňů and bassist Vlastimil Škoda (both alumnis of VOŠ Jaroslava Ježka in Prague) they found not only a very strong rhythm section, but also soulmates and highly original players.

In 2020 the band released a 5-piece video-series of live sessions in different, often unsual environments, which was also released as EP Live Sessions available on Spotify or Bandcamp. In this pandemic year, they won the 2nd prize in JazzFruit competition (CZ) and were selected to the final of international competition of the festival Jazz in the Park (RO), which was cancelled due to restrictions. Currently they are working on an eponymous debut album, which is planned for spring 2022.