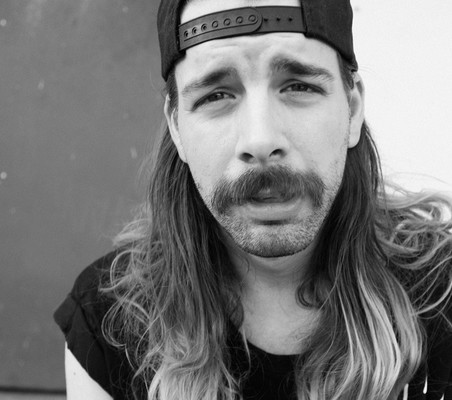 Wild, uninhibited, self-centred, self-destructive, at times introverted and melancholic, Lazer Viking is a unique phenomenon on the Czech scene – the embodiment of a devoted rock’n’roller, who works his socks off on stage. A bit of a clown, a bit of a guitar slinging messiah, now he makes you laugh, now he makes cry. You either love this one man project or you hate the entire essence of rock’n’roll. Jakub Kaifosz first drew attention as a member of the surf-punk trio Wild Tides that entered the rock scene from the recesses of the Prague district of Letná, at the onset of this decade. He embarked on a solo career under the name Boy Wonder & The Teen Sensations and completed his rock’n roll apprenticeship, in its various forms, on his dubut album Radical Karaoke, released in 2015. Under the newly assumed name of Lazer King, Kaifosz, for his second album "Flesh Cadillac", joined forces with the British electronic producer known as Sabreheart, which resulted in a Dadaistic mix of guitars and synths reviving the 80s New Wave. Both albums brought Kaifosz the Best Record of the Year nomination for the Apollo Prize awarded by Czech music critics. The upcoming third album titled "Drag" (due out at the start of 2019) was made with a significant input by Chuck Rowell from the Crocodilles.

“There is nothing worse than being idle, not having a thing to aim at,” is how Lazer Viking described his work ethic in the autumn of 2016 in his interview for Full Moon. He has no time for rest. Ideally, he plays a gig a day, if not two. His music roots stem from 60s pop music, traditional American rock’n’roll, and Elvis Costello in his coat of arms. Two chords, vocal backup barking doo-wop and salami pizza for supper. The 50 years dead genre still rules the roost. Lazer Viking gets plenty of thumbs-ups as well as derision but he knows only too well he can’t win them all. Unlike many others he takes it in with a broad smile: “All it takes is to put on that silly lady’s Perfecto jacket I got second-hand, match it with a cheap pair of sunshades from the chemist’s and out of the blue I turn into a rock’n’roll desperado.” His words can only be taken at face value.