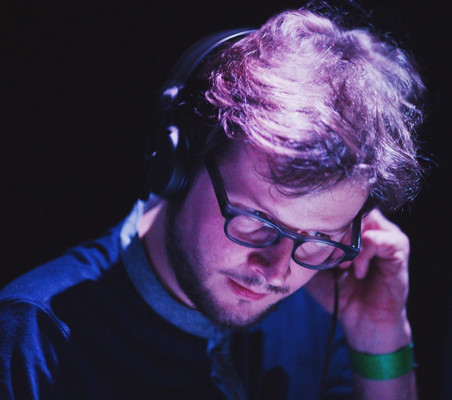 Tomáš Dvořák (*78) aka Floex- clarinetist, composer, producer and multimedia artist from Prague (Czech Republic). His music is characteristic by unique exploration of electroacoustic nexus and deep atmospheric mood of his tracks.

In 1996 Tomáš started to compose under his project name "Floex". His debut album Pocustone (2001) bridges relatively isolated genres such as nu-jazz, electronic and modern contemporary music. The album was highly critically acclaimed not only in the Czech Republic and gained several awards (Angel Award 2001 and Nomination to Europian Qwartz Awards).

He is well known for his cooperation with Amanita Design on the soundtracks for the games Samorost 2 (2006), Machinarium (2009) and Samorost 3 (2016). Machinarium OST gained massive reaction by both fans and critics and was selected as the best 2009 soundtrack according world’s number game magazine - PC Gamer.
Ten years after the debut in 2011 Floex releases new album Zorya. Probably most profound album up to date is going further in exploration of acoustic music (especially classical minimalism), soundtrack music and contemporary electronic. Album which takes as symbol Slavic night guard goddess “Zorya Polunochnaya” explores more deep, subconscious and nightly moods of music. However don’t be mistaken, this may be Floex most energetic album up to date - very adventurous, almost storytelling. Zorya received two Angel Awards (Cezch sort of Grammy Awards) in Electronic music and Alternative music category and also has been nominated to Apollo and Vinilla Awards.
In 2013 Tomáš starts cooperation with Germany label Denovali Records releasing Gone EP featuring remix by Hidden Orchestra.

“It all started as a friendly encounter of two musicians without a clear intent. What brought us together was our love of the piano, electronica and the clarinet, which we both play. During several years we used to meet in the Prague Floex Studio and our intimate improvisations gradually grew into a spectacular project intertwining the sound of present-day electronica, Tom’s piano and the symphonic orchestra,” is how Prague music producer Tomáš Dvořák describes the origin of an album on which he worked with London composer and musician Tom Hodge (Piano Interrupted, Max Cooper, Second Moon of Winter). Although their conceptual electro-acoustic album might have seemed, especially with the added orchestra, overly grandiose, the creators managed to trim their ambitions down to impressive compactness. A Portrait of John Doe is a musical re-enactment of a story of an ordinary, common man in the present world, tensely awaiting the fourth industrial revolution. He tackles the challenges with humour, overstatement and inner imagination. The recording was made in conjuction with the Czech Radio Symphonic Orchestra and released by Mercury KX Publishers, Decca’s new sublabel.

Although the concept, the geographic distance between the musicians and, specifically, the deployment of a symphonic orchestra with the ensuing logistics, plus the time and money constraints do not allow for extensive touring, the infrequent performances were organized with simple yet remarkable multimedia skills: “To finance the orchestra was an insurmountable obstacle. Only once did we manage to use a full orchestra. So, we filmed individual orchestra players with 35 cameras and created a concept in which the accompanying instruments get projected onto the balconies that levitate above our heads,” reveals Floex, who has since his student days specialized in multimedia installations, presenting them regularly at experimental festivals and unusual locations (i.e. the Android horologe named Archifon recently installed in Spanish Oviedo, which combines interactive mapping with aspects of church architecture). After the autumn ten-venue tour, which closed in Russian St. Petersburg, Floex and Tom Hodge released – again with Mercury KX/Decca Classics – a digital EP titled John Doe: Arise in Prague that includes live performance of various compositions from the debut album featuring the Czech Radio Symphonic Orchestra as well as four percussionists. Eurosonic Noorderslag is so far the only concert venue they have booked for 2019. In other words, when exclusivity goes hand in hand with the originality of artistic expression.