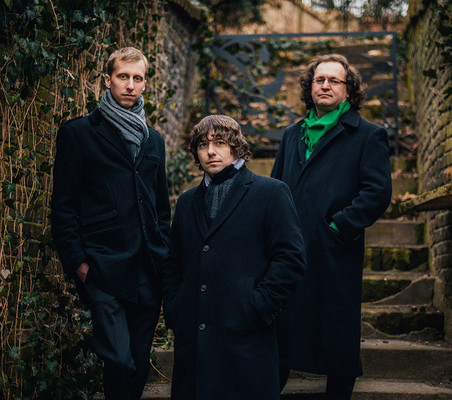 Ponk, an innovative new trio from Moravia in Czech Republic came together in 2013. Moravia has one of the richest living folklore traditions in Europe, with diverse dialects spoken and customs, traditional costumes, dances and musical styles that vary greatly from village to village.

The unique texture of Ponk’s music is largely down to the sound of cimbalom. Unlike traditional folk musicians, however, Ponk make use of the instrument’s entire sonic and rhythmic potential, often producing sounds reminiscent of a strange new rock guitar. Likewise, the double bass has abandoned its traditional folk sound to follow new melodic, rhythmic and percussive paths. Ponk’s overall sound is complemented by an instantly recognizable “dirty” violin sound, with intentionally non-folk, rock phrasing. Add to this, distinctive lead-vocals layered over creatively constructed harmonies and you have a unique and distinctly post-folklore sound that breaks all boundaries of the genre.

Postfolklor has received positive reviews from all over the world. It was featured in Top 20 World Music Charts Europe and played by radio stations in Germany, France, Connecticut and Alaska. In March 2016, Ponk was awarded Andel music prize for the best Czech world music album of 2015.

This year the trio composed and recorded music soundtrack to „KIV. – King by favour of the divine mercy“, interactive comic with game elements for the biggest local state TV channel Czech Television.

The band was chosen to represent the Czech Republic at international showcase & conference Czech Music Crossroads in summer 2016. Ponk will be the first band ever to sing in Czech language at the prestigious festival and showcase WOMEX – The World Music Expo which will take place this October in Santiago de Compostela, Spain.