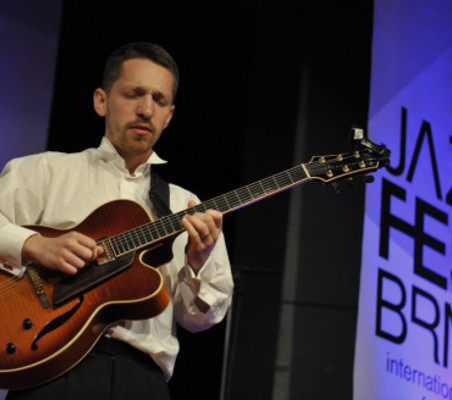 Libor Šmoldas was born in 1982 in Olomouc but he has lived in Prague his whole life. He started with music as very young, he played the flute and the trumpet and started guitar at 12 years old. It was mainly his fascination with Charlie Parker records that led him to jazz after his beginnings in rock and blues bands.

During his studies at the Music grammar school Evropská he made his debut in Prague jazz clubs with American singer Phil Speat’s blues band and the Sunday jam sessions in U Malého Glena jazz club. He took private guitar lessons with Josef Kůstka and later with Luboš Adršt, Zdeněk Fišer and Petr Zelenka, who was an important influence to him. He was also a student at several Karel Velebný jazz work shops in Frýdlant.

After grammar school, in 2001–2003 he went on to study jazz guitar at Jaroslav Ježek Conservatory as a student of Jaroslav Šindler.

He continued his studies at the newly opened jazz department of the Jaroslav Ježek College (2003–2006) where he came on as a student of Peter Binder, Josef Štěpánek and David Dorůžka. His classmates included Jakub Doležal, Daniel Šoltis, Rastislav Uhrík, Vojtěch Procházka, Oskar Török, Roman Vícha, Ondřej Pivec, Tomáš Hobzek and other prominent musicians of the new generation.

While he was a student at the conservatory, he gradually became a part of the jazz scene in Prague. Besides the above mentioned peers, he also participated in various projects where he met NajPonk, Jaromír Honzák, Radek Zapadlo, Jiří Slavíček, Jaroslav Uhlíř and other important older generation musicians. He also played in the Polish-Cuban singer Yvonne Sanchez’s band, which he went on tour with in Turkey and Cyprus as a support band for Billy Cobham.

In 2005 in Freiburg, Libor Šmoldas won a scholarship for US Berklee College of Music, which he decided to decline and stay in Prague.

The first time he went to gather experiences to the US was in 2009. During his first two stays in New York, he studied with local jazz guitarists, including Paul Bollenback, Lage Lund, Mike Moreno, Ben Monder, Steve Cardenas and Peter Bernstein.

After some time following graduation from the music college, he went on to study jazz guitar at Janáček Academy of Music and Performing Arts in Brno (2010–2013) where he received his bachelor’s degree as a student of David Dorůžka and Vilém Spilka.

He finished his academic education by graduating with a master’s degree from HAMU in Prague (2016–2018), also as a student of David Dorůžka.