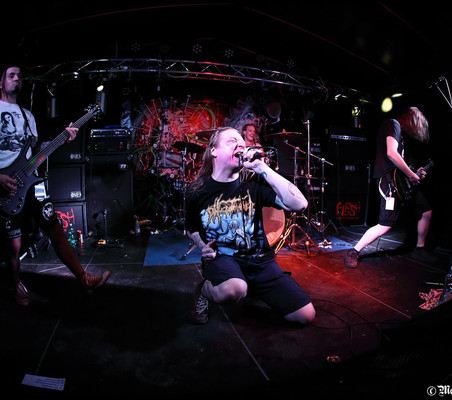 Kandar was formed in Brno in 2015 as a grindcore project founded by two skilled extreme musicians - drummer Denis Kudyn (Mincing Fury…) and guitarist Jakub Fritsche (Forgotten Silence, ex-Somnus Aeternus). They are joined by vocalist Topi (ex-Mincing Fury…, ex-Pigsty)  and record a four-track EP. Shortly after that they are signed Bizarre Leprous Rec. and release their debut album „Groovy“ (2016). Áfter the release they start actively touring and play the famous Obscene Extreme festival. During the preparations of their second album „Tromaville“ (released in the summer of 2018), Kandar played at many events in the Czech Republic, including supporting the grindcore legends Napalm Death, and toured abroad. Their latest record „Cluster Headache“ was released at the beginning of the coronavirus pandemic, but they still managed to show their new explosive material live at the mini-version of the postponed Brutal Assault.