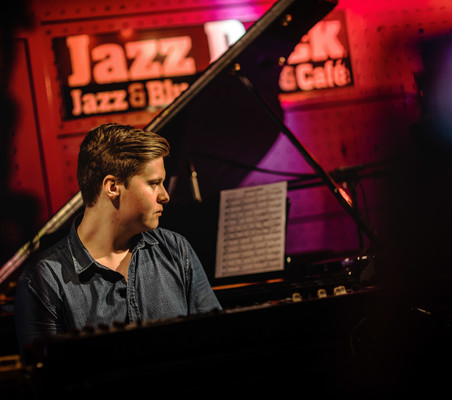 Daniel Bulatkin is the youngest professional jazz musician on the Czech scene. He was born in 1999 in Prague. As a 15-year-old, he was awarded 3rd place in the solo piano competition ‘Pianist of the Year 2015’ organized by the company PETROF. He was the only underage participant in the history of the competition. In 2018 he won the individual talent prize at the Central European Jazz Competition in Brno. Daniel is currently studying the jazz bachelor program at the Academy of Performing Arts in Prague. There, he's had the opportunity to perform, among others, with saxophonist Zhenya Strigalev (RU).

Daniel is currently touring his critically acclaimed debut album "The New Beginning" with B/Y Organism – a collaboration with ethno-fusion guitarist Kirill Yakovlev, featuring Daniel mostly as an organist. At the same time he is preparing two more albums for release – one being the product of extensive touring alongside British alto sax prodigy Tom Smith, the other being a project with gifted American vocalist Allison Wheeler.

Daniel’s original composition Lady of the Lake, arranged for big band by Andy Schofield, is now part of the repertoire of the prestigious Jazz Dock Orchestra. In years 2018-2020 he was also a member of faculty at the International Conservatory in Prague.