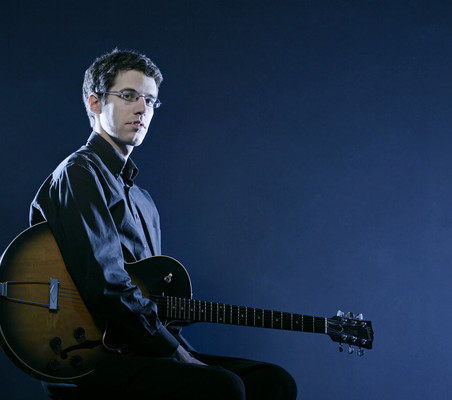 David Dorůžka, guitar - born in 1980 in Prague, Czechoslovakia, he took up the guitar at the age of ten and from the age of fourteen started performing with leading musicians on the Czech jazz scene. In 1995 he received the “Talent of the Year” award from the Czech Jazz Society. He played on award-winning recordings of Karel Růžička Jr. (You Know What I Mean, 1997) and Jaromír Honzák (Earth Life, featuring Jorge Rossy, 1998). From 1999 until 2002 Dorůžka lived in Boston in the USA and studied composition and improvisation at Berklee College of Music. Among his teachers were Joe Lovano, Mick Goodrick and George Garzone. Dorůžka was chosen by Pat Metheny to participate as the only guitarist in the Aspen Snowmass Jazz Colony in Colorado in summer 2000, where he studied with Christian McBride, Joshua Redman, Brian Blade and Herbie Hancock among others. In the summer 2002 Dorůžka took part in a tour with the “Swinging Europe” project led by British pianist and composer Django Bates. After graduating from Berklee, Dorůžka lived in New York City from 2002 to 2003. In New York he recorded his first CD Hidden Paths, which was awarded the Anděl prize in the Czech music academy awards as CD of the year 2004 in Jazz&Blues category. Since moving back to Europe at the end of 2003, Dorůžka has been performing mostly with his own trio and also working in a quartet with singer Josefine Lindstrand from Sweden. He can also be frequently heard as an accompanying musician with Divadlo Vizita, a Prague-based free-improvisation theatre. In addition to performing and composing, Dorůžka dedicates his time to pedagogical activities. In the past years he has taught at the Department of Higher Education at the Conservatory of Jaroslav Ježek in Prague and since 2003 he has been a teacher at the annual Prague Jazz Summer Workshop. He has also given masterclasses and clinics in Czech Republic and abroad.

Dorůžka has appeared at important festivals in the US (Monterey, Cleveland and others), Canada (Montreal), and in many European countries (festivals in Vienne, Copenhagen, Warszaw, Athens and others). Countries where he has performed also include Austria, Germany, Switzerland, France, Spain, Portugal, Denmark, Sweden, Greece, Poland, Slovakia and the Czech Republic. The list of musicians with whom he has worked includes names such as Jorge Rossy, Django Bates, Tiger Okoshi, Perico Sambeat, Albert Sanz, Rodney Green, Orrin Evans, Kenwood Dennard, Phil Wilson, Greg Hopkins, Don Grusin and many others.