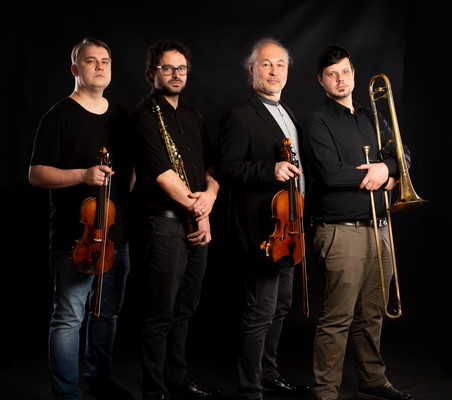 The idea of playing together didn’t come out of nowhere. In the begining there was an original project which featured Jiri Hodina and few of friends. Later the current line-up came together at the start of 2017. “We got together of a few beers and soon worked out our instruments would sound good together. This Jazz/Folk/Beer combo tasted so good we decided to make it our own brand…. And so Mantaban was born.”

It is difficult to put Mantaban into any specific pigeon hole. “We’re a group of creative, enthusiastic performers who seek to approach folk music from a different perspective. You can imagine Mantaban’s music playing in many different venues. Mantaban is inspired by having a good time. “Music is fundamental to all our lives and we don’t want to keep our songs to ourselves. We’re hoping we can reach out and touch others with this happiness.”

The band hopes to carry on making music and to talk to its audience through the concerts and spontaneous, unusual recordings.

What about the album Neon folk, 2017?
”We tried to build bridges between modern and traditional music inspired by local folklore, to produce a unique sound combining influences from many sources.”

What about the new EP Splatters, 2019?
”We chose the name according to the jazz trio The Splatter Trio, which dealt with free improvisation and playing from graphic scores. We tried to stimulate the listener’s musical imagination, fantasy and let everyone listen to their own story. Perhaps EP will delight you with its atmosphere, charge and energy.”