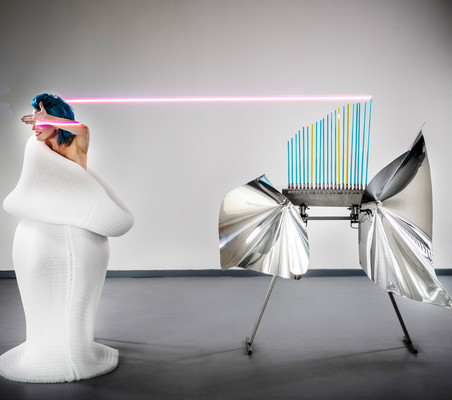 “BCI is a wild beast. It keeps surprising me what’s happened and carries on happening with respect to this project. Actually, it was an experiment right from the start and I did not expect it would get such a response. I have been on it for a year and it’s been a super fast roller coaster,” said the soul of the BCI project, Lenka Morávková, two years ago. And it was no empty waffle. The first Czech-made Cristal Baschet instrument was the result of a collaboration with the Spanish constructor and musician Martí Ruids. It was based on the legendary glass instrument made by French sound innovators, the Baschet brothers.

It was first shown to the public during the International Glass Symposium (IGS) in the town of Nový Bor. Later, Lenka Morávková, a.k.a. KnofLenka, moved to the US where she scored a big success with her viral video by demonstrating the sound range of the instrument in a flowering Californian desert (viewed by over two million people). During her study trip to Los Angeles she performed there in the most prestigious Broad Club, also featured in the respected TEDx Talk, followed by gigs across Europe that culminated in her first concert at the Colours of Ostrava Festival. This year in June, she released her debut EP record called Unicode. It combines the unique sound of her glass instrument with nebulous vocals, synths and delicately minimalistic rhythms, enticing the listener into a kind of warm, indeterminate melancholy. Ambient transcendence in the digital age. One way of putting it. Playing live, KnofLenka deploys a fusion of pulsing, hypnotic levels with immersive light show, creating a unique experience for all human senses. A music ritual that creates a bridge between tradition and futurism.

The Drowned SP was made in Los Angeles’ Seahorse Sound Studios, used by Devendra Banhart, Zola Jesus, Brodka and Paris Hilton. The EP mix was later mastered by Danielle Warman from The Chiller Sound Studio in New York, in which the likes of Mike Gordon and Bruce Springsteen mix their albums. On the visual side, costumes, props and stylized videos round off the distinctive entirety of the project, dominated by the Bohemian Cristal Instrument: “I don’t even perceive it as an instrument, it feels like a wilful entity that plays through me. I really enjoy travelling with this instrument to unknown places, although physically it can be rather demanding. I’d like to take it to the Los Padres National Forest which nearly burnt down last year. Also, I positioned it in a lake the Italian Alps,” says Lenka Morávková, travelling with a glass suitcase.