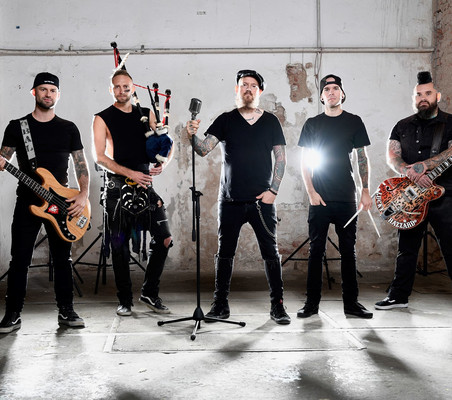 Pipes and Pints is a punk-rock band which was formed in 2006 by Vojta Kalina in Prague. At the same time, Vojta has started to play bagpipes which should become the base sound of the band music.

A year after the band released a demo and toured the Czech Republic and Central Europe. The band originally consisted of Vojta Kalina (bagpipes), Tomáš Novotný (guitar), Petr Bláha (drums). Kráťa (guitar) and Eddy Allen (bass guitar and vocals). The vision of the future for Pipes and Pints was not shared by all members so in the end of 2008 the drummer was replaced by Lukáš Vincour, a singer by Syco Mike and bass guitarist by Ondra Balvín.

They have proved to everyone that they were serious about their music as evidenced by their relentless and voracious touring of European clubs and festivals. The band got a reputation as true believers who give it all they have. In December they recorded a 5-track EP which immediately became a promise of better days and the beginning of a new adventure and the boys didn't hesitate to hit the road with it.
In the end of 2009, they have toured a lot of concerts in Europe and with the cooperation of Wolverine Records and Unrepentant Records are releasing their debut Until We Die.

Pipes and Pints are devoting 2010 to what they love the most: live shows. With plans to support the album with as many gigs and tours as possible, Pipes and Pints are looking forward to making music "until they die". Their album was positively reviewed by media in Europe. The radio station has played songs from this debut and not only in Europe but also in Japanese, North and South America or Australia. The band was in foreign music charts, for example in American Top Ten Shite ‘n‘ onions or Germany Celtic-Rock.de. Czech music television Óčko has nominated them as a new artist of the year and turned on their video clips. In the music chart of radio Rockzone, they reached number one in Top 20 for a few weeks.

In the year 2010, they have toured 110 clubs and festivals as the main band of the event. They have toured also their own European tour for a month in cooperation with Rock For People together with The Locos (members of Ska-P) or club tour Mighty Jäger Tour which was sold out.
In the year 2011, they toured Russia, England, European tour with a band Born To Lose and a lot of European festivals such as Rebellion, Force Attack or Mighty Sounds. But not everything was as they planned. During summer Mike said that he would like to leave the band and move back to his homeland, California. The rest of the band were searching for a new singer and they found Travis O’Neill. However, Mike realized that he did not want to leave the group because he would miss the band. He announced that he wants to return and the rest of the band agreed.

In the year 2011, they started to work on the new album in cooperation with the Californian producer Darian Rundall, who worked for example with Pennywise, US Bombs, Suicidal Tendencies or Yellowcard. After few months they were recording for three weeks in Prague Sun Studio. In summer 2012 was about finishing the album and touring festivals such as Rebellion (UK), Resist to Exist (DE), Punk Rock Holidays (SLO), Open’er (PL) but also Czech stages as Mighty Sounds or Keltská noc.

Found and Lost is the second studio album which released in November 2011. It was released on People Like You record for the foreign market and in the Czech Republic on Supraphon records. The album got positive reactions from critics and media (MF Dnes, Full Moon Magazine, Report) in the Czech Republic and Europe. Fans supported the album and sold out concerts during the winter tour. The icing on the cake was the invitation to CEETEP, music trade in Netherlands which offers the best music bands in Europe. In the beginning of 2013 Pipes and Pints got a lot of awards from critics, fans and music academy Anděl awarded the album as the best album of the year 2012 in punk/hardcore category. In spring they toured for three weeks a lot of foreign festivals such as Les Feux de Lete (FR), Rock’n’stock (FR), Eier mit Speck (DE) and in the Czech Republic České Hrady. In autumn they tour again Europian stages and Russia.
The band was more and more successful but in the beginning of 2016 the guitarist Tomáš Novotný left the band and he was replaced by Ivo „Rafan“ Traxmandl. However, plans for the third album was destroyed and the fans and band itself started to have doubts about the future career. After summer festivals they announced that they will have a break for an indefinite period. During the break, Mike decided to return to the USA and has stopped to cooperate with the band.

The rest of the group really missed the band and concerts on the stage. They started to hang out together even more and after they realized that they would like to continue with the band. After long discussions, they found a new singer, Irish Travis O’Neill. They felt that he is the right choice and enjoyed the jam sessions together.

In autumn of 2017, they were recording 4 new songs in cooperation with Yarda Helešic. The new era of Pipes and Pints has just become. They are planning to release each song in every 2-3 months. Together as a new band formation have already full calendar of concerts and summer festivals until the end of 2018 and beginning of 2019 so we can look forward to a lot of concerts.