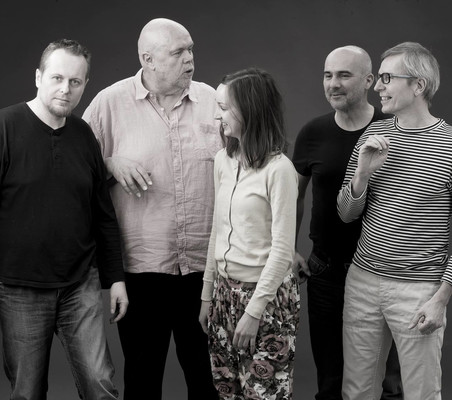 Jablkoň musical group formed thirty years ago. During the Communist totalitarian regime they faced, like many other bands, prohibition, censorship and further difficulties. Nevertheless, they managed to gain a good reputation thanks to their original music. After the Velvet Revolution and the fall of Communism, the band took advantage of open borders and started giving concerts abroad. At that time they also established cooperation with a violin virtuoso Jaroslav Sveceny and various symphonic orchestras (altogether five) in experimental projects called Jablkon & Sveceny and Symphonic Jablkoň. Since 2000 the band has been giving concerts and recording music, besides that they have also recorded two film soundtracks, several TV and theatre productions and have regularly performed with a dance acrobatic troupe Galumpha (USA). During the last ten years Jablkon has become much younger, which means that out of the former lineup there has remained only “the soul of the band“ Michal Nemec. Nowadays Jablkoň is playing in this lineup: Michal Nemec (vocals, guitar – author of the majority of music and lyrics), Michal Carvan (guitars, chorus), Johnny Judl (bass-guitar, electrical guitar, bassoon, chorus), Petr Chlouba (drums, percussions, accordion, chorus). All of them graduated at a Conservatory or the Academy of Performing Arts. The main figure on the stage is Michal Nemec, a giant singer, Martin Carvan is an elegant and brilliant guitar magician, Johnny Judl a robust, uncompromisingly playing bassist and Petr Chlouba is a multi-handed drummer who rumbles, jingles or strokes as needed. Undoubtedly, today Jablkoň is influenced by various contemporary musical streams, however its music remains unique and inimitably enticing.

Jablkoň’s discography includes eight CDs, plus one Best of CD, one Live CD selection, two more Live CDs with a symphonic orchestra and a DVD. Jablkoň has won two Andel Music Awards (Czech parallel to Grammy Awards) and has been nominated for this award eight times.