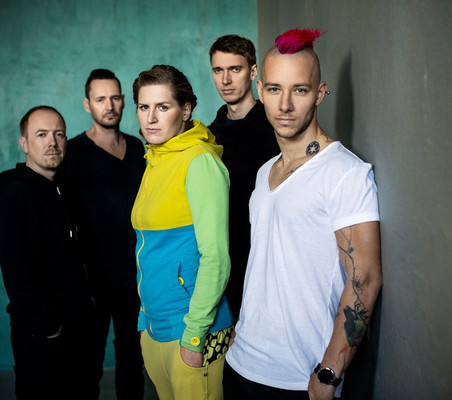 1998 – playing at the legendary JeleniPrikop festival at Prague Castle alongside The Orb, 808 State, Transglobal Underground.

2001 – The debut album Riders In The Store was released in 2001 (Intellygent Recordings) and Skyline became part of the music scene around Prague ́s famous club Roxy.

2003 – The band is playing at Go Planet Roxy festival alongside Morcheeba, Marilyn Manson, or Moloko, to name only a few artists headlining the dance stage. Skyline also perform at gigs in Portugal or Germany.

2004 – 2nd album Urbanica (U:Bahn Records) is released in spring 2004, followed by a sold-out show at theband’s home based venue Roxy. The band is getting Best Live Act in Czech Dance Awards. Besides the Czech Republic and Slovakia Tour, the band is playing at Amsterdam Dance Event and touring Poland.

2005 – The band is supporting legendary Underworld during their Prague show, defending first place in Czech Dance Awards as Best Live Act, getting an ALMA Award for The Best Live Dance Act (ALMA awards are based on votes of people involved in the music industry) The band is performing at most important festivals in the Czech Republic alongside artists like Nick Cave, Kosheen, Manu Chao, and many others.

2006 – In March 2006 Skyline released their ambitious third album called Virginplatonicpanic (X Production), which includes hit singles Ladies, Ninja! and Pretty Princess. DIY lo-fi video for Pretty Princess released only on YouTube has already had more than 500 000 views. The band is receiving Best Live Act in Czech Dance Awards again, together with a TV Ocko Award (Czech music TV) for Best Dance Act. The band is performing at Eurosonic Festival in Groningen (Netherlands), and plays its first show in London.

2008 – they released the album Escapism and their first DVD Live In Fléda, which is chronicling their sold-out show in a popular Czech club Fléda. Apart from the theatre tour in the Czech Republic, the band is playing in Slovakia, Hungary, and performing their first show in Paris.

2011 – the band is playing Sziget Festival in Hungary and touring USA for the first time.

2013 – in March 2013 Skyline released their sixth album Fairytapes (Championship Music), which has topped digital charts in Czech Republic for three weeks and also gained positive reviews from the music press: „The most entertaining record in their discography! Skyline feel tight and united like never before.“ (MF Dnes)

2016 – in May 2016, Skyline released their latest album Jungle (under Championship Music) which succeded in selling charts (official source IFPI.cz). The recording took two years and a half, and the  result is a colourful album of mixed genres. „The album has no weak points, every track offers a catchy motive. Theproduction work exceeds Czech standards.“ (Aktualne.cz) Jungle won Album Of The Year at Zebrik Awards.