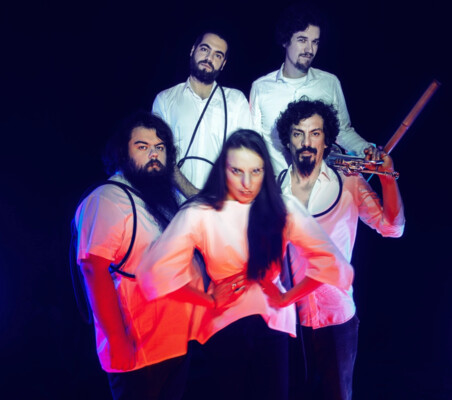 Singer and voice performer Annabelle Plum (* 1984) uses her more than three octave range in contemporary music, improvisation and jazz. She focuses on experimental voice techniques and tone color. Plum`s interest lies in the interpretation of graphic scores and site-specific performances.

Plum studied Theatre Arts at Brown University (USA) and Performance Design and Practice at Central St Martin’s (UK). She studied extended vocal techniques pioneered by Roy Hart as a personal student of Jonathan Hart Makwaia in France and USA. She lives In Prague since 2009, where she creates her own work and teaches experimental vocal techniques. From 2013 to 2015, she taught a course as a guest lecturer at the Academy of Performing Arts in Prague (DAMU). Since 2016, she has been studying voice under the direction of top Noh Theater performer,  Hisa Uzawa (Kanze School) in Tokyo.

She made world premieres of works by the following composers: Ian Mikyska, Petr Hora, Anna Vtipilová and Michal Wróblewski. In 2020, she premiered two new chamber operas, The Window of Petr Hora and .finitics by Patrik Kako. In the same year she was a soloist with the Berg Orchestra, for the Czech premiere of Sweetheart, Goodbye! German composer Brigitty Muntendorf. Annabelle Plum is a founding member of TOPOS KOLEKTIV, she performs in a duette with Žaneta Vítová (voice and accordion), she is the frontwoman of Die Schatten (alternative rock) and part of the international trio Quarter to Three (microtonal improvised music).