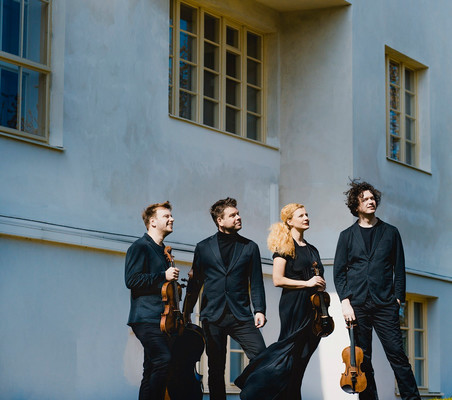 The Pavel Haas Quartet was founded in 2002 by the violinist Veronika Jarůšková and the violist Pavel Nikl, who was a member of the ensemble until 2016, when he left due to family reasons. Yet their collaboration has continued – Pavel Nikl has been the ensemble’s permanent guest for string quintet performances. Between 2004 and 2012, the second violin was played by Kateřina Gemrotová Penková, Marie Fuxová and Eva Karová Krestová. In 2016 and 2017, the viola was played by Radim Sedmidubský, in 2018 and 2019 by Jiří Kabát.

Following their victory in the Prague Spring Festival Competition and Premio Paolo Borciani in Reggio Emilia, Italy in 2005, the Pavel Haas Quartet soon established themselves as one of the world’s most exciting contemporary chamber ensembles. Performing at the most renowned concert venues around the globe, the PHQ have to date recorded eight critically acclaimed CDs, which have received numerous prestigious awards. The ensemble members studied with Milan Škampa, the legendary violist of the Smetana Quartet.

In 2007, the European Concert Hall Organisation (ECHO) named the Pavel Haas Quartet one of its Rising Stars, following which they were afforded the opportunity to give numerous high-profile concert appearances all over the world. Between 2007 and 2009, the Pavel Haas Quartet held the title of BBC New Generation Artist. In 2010, the ensemble was granted a classical music fellowship from the Borletti–Buitoni Trust.

In autumn 2020, the Pavel Haas Quartet will appear as quests at the Merano Festival, Italy, at the St Wenceslas Music Festival in Ostrava, as well as at the Burg Taggenbrunn, Austria. In the beginning of October, they will be performing at the Rudolfinum in Prague at an evening held within the Czech Chamber Music Society concert series. The programme includes the world premiere of the Slovak composer Ľubica Čekovská’s Octet for two string quartets, commissioned by the Pavel Haas Quartet, who will be joined by Italy’s Quartetto di Cremona. Further the PHQ will give recitals at the Lednice-Valtice Music Festival and the Janáček Brno 2020 Festival. In late October and early November, the ensemble are scheduled to perform at the Elbphilharmonie in Hamburg, Wigmore Hall in London and Teatro della Pergola in Florence.