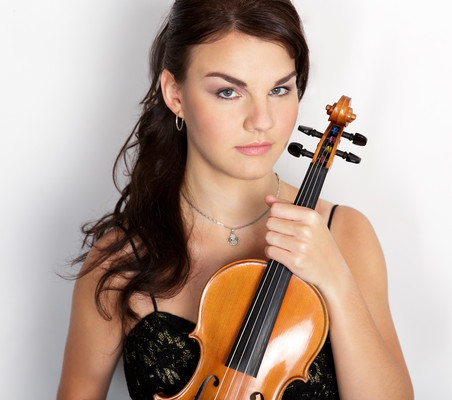 Olga Šroubková (1993) has been playing the violin since the age of four, when her mother, Rimma Kotmelová, a graduate from the Moscow Conservatory in the class of Professor Viktor Pikaizen, began to teach her. When she was eight, Olga joined the class of Professor Jiří Fišer at the Music School of Prague, graduating under the same teacher from the music programme of the Jan Neruda Grammar School and, in 2014, from the Prague Conservatory. Since October 2014, Olga has been studying at the Hochschule für Musik, Theater und Medien Hannover with Professor Adam Kostecki.

Olga is the laureate of numerous Czech and international competitions:

Bohuslav Martinů Foundation Competition 2013 in Prague, Czech Republic (1st prize and the award for the best performance of a Martinů composition)

Michael Hill International Violin Competition 2017 in Queenstown/Auckland, New Zeeland (4th prize and the award for the best performance of a contemporary composition)

Shanghai Isaac Stern International Violin Competition 2018 in Shanghai, China (2nd prize and the award for the best interpretation of a contemporary Chinese composition)