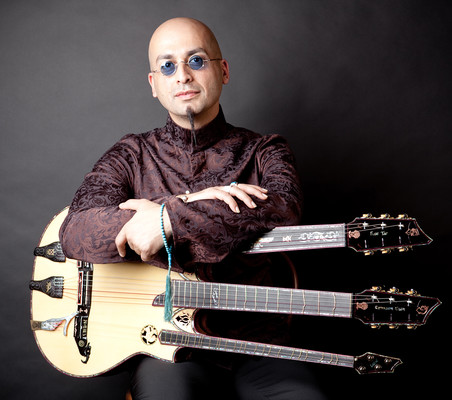 A band of diverse musicians playing an exciting fusion of Persian & Flamenco music called “EthnoFlamenco”. Excellent performance, originality as well as virtuosity of each member of the band takes the audience to an exciting journey from the Caspian Sea to Persian Gulf and through the entire Mediterranea to Spain.

At live performances the audiences get to see/hear Shahab Tolouie’s contemporary yet mystical vocal, as well as the world unique triple-neck “FuseTar” that has been introduced repeatedly by the media heavyweights (BBC, Reuters, Acoustic Guitar Magazine, Esquire Magazine, Voice of America, etc.) as a jewel in the world of instrument craftsmanship.

The band’s sound exceeds the borders of one distinct style by mixing elements of various ethnic and modern roots to their music, which is based mainly on the heritage of Shahab’s motherland Iran and musical tradition of Spain where he’s got his degree in Flamenco. One of the main aspects of this music is the use of philosophical poems of Iranian classical era of 13 and 14 centuries, which gives their original pieces it’s specific rhythm and structure.