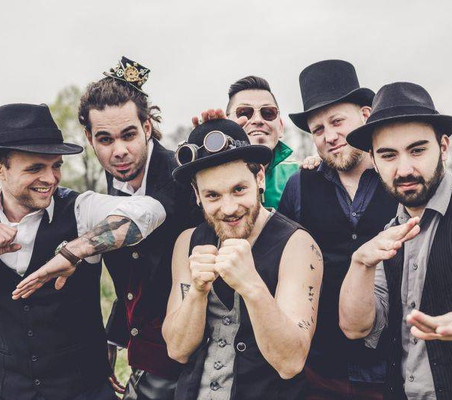 From the largest Czech festivals via concerts in Germany, Austria, Romania and Slovakia to a lot of clubs and street busking. Circus Brothers obviously have tons of energy to spare and are capable of entertaining their audience until the early hours with the nonchalance of clowns and the drive of gobbing punks. Named as Circus Brothers, they have diligently worked the scene for the past two years although their faithful fans do remember the band from its previous stint as Circus Problem. This sextet is inspired mainly by Czech and Balkan brass music, which they serve with a dash of disco, rap, house, electronica beat or folk. The term they chose to slap on their motley mix is “disco-balkan” despite a rather traditional instrumentation: drums, keyboards, clarinet, violin, trombone, baritone horn, melodeon and guitar. The epiphanic moment for the band’s frontman, Eliáš Jeřábek, came while he was watching the film Underground by the Bosnian director, Emir Kusturica. The film’s raw, unsentimental portrayal of life became Jeřábek’s main source of musical inspiration. The members of the Circus Brothers not only play, they also research their music during their foreign travels. The violinist Martin Sedlák based his diploma thesis on this topic. In January 2018, the Circus Brothers self-financed their debut album titled #vjeržim and took it on their Czech-Hungarian tour, on which they were joined by a Hungarian band called Bohemian Betyards.