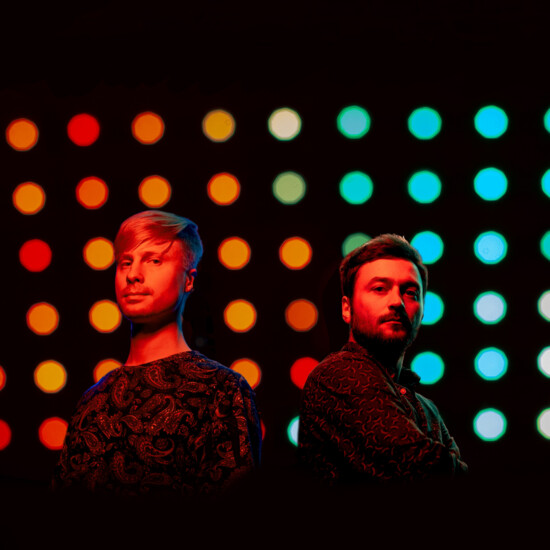 Three years since the release of their debut album Journeys, the international Alf Carlsson/Jiří Kotača Quartet, whose members are the Czech trumpet player Jiří Kotača, the Swedish guitarist Alf Carlsson and a Slovak rhythmic section – the double bass player Peter Korman and the drummer Kristián Kuruc – is releasing a new track Focused Voice.

The track represents a turning point for the quartet. Given the geographical distance between the members of the quartet, they had always created their repertoire separately, however, the single Focused Voice emerged from a joint session in Stockholm and its final version was recorded in the studio of Divadlo na Orlí in Brno. The band also started using live electronics in the form of effect pedals and pads.

“We’ve been drawn to electronic music or effect pedals for quite some time because they allow one to engage in more extensive work with sound and its bending. In the long term, one of the building blocks of our music has been work with a wide palette of sounds, the electronics only helps us widen it even more,” Kotača says.

In addition, Focused Voice hints at work on a new album and also a short tour.

“We’re still catching up on concerts a bit, from the two previous covid years, some were moved several times. For this year, we’re preparing several concert blocks in the Czech Republic and Slovakia. In the summer, we’ll also head to Bulgaria for the first time, to play several shows. Apart from that, we’ll be writing more music soon and, about halfway through the year, we’ll be releasing another single that we composed during the last recording session,” Kotača adds about their plans for this year.

Kotača and Carlsson got together during their studies in the Dutch city of Rotterdam. Alf Carlsson/Jiří Kotača Quartet, complemented by the excellent Slovak jazz musicians Peter Korman and Kristián Kuruc, has played dozens of concerts at jazz festivals and in clubs in Sweden, Slovakia and the Czech Republic. Their work mixes influences from lyrical Scandinavian music and modern jazz with a dash of Moravian and Slovak folklore, which brings out a unique sound, with emphasis on colourfulness, strong melodies and the interconnection of different musical traditions and roots.

Alf Carlsson ranks among the most sought after and most versatile Swedish musicians. He graduated from the prestigious Royal College of Music in Stockholm. In 2013, he received the prestigious award Albin Hagström Scholarship for young promising guitarists in the field of popular music. A year later, he composed music for the Nobel Museum in Stockholm upon the occasion of the awarding of the Nobel Peace Prize to Malala Yousafzai. He has played dozens of rock, pop and particularly jazz concerts. Currently, he collaborates with, for example, the Swedish-French quartet Les Enchantes, Jazzcats, Jessica Curran or Julia Jonas.

Jiří Kotača is a recognized trumpet player and composer. He is the bandleader of the big band Cotatcha Orchestra, he was nominated for the Czech Anděl Award and he’s the winner of Česká jazzová sklizeň 2020 (the Czech Jazz Harvest). He has international experience from music universities in Rotterdam and Barcelona, he has been collaborating with the artist Ilja Reijngoud who’s been nominated for a Grammy, with Mar Vilaseca or the European Jazz Radio Orchestra.

The release of the single Focused Voice was supported by the Czech export office SoundCzech. The concerts of Alf Carlsson/Jiří Kotača Quartet will take place on 30 March in Brno’s Music Lab, on 1 April at the Spectaculare festival in Prague in Palác Akropolis and on 2 April at the Slovak festival Kubínská hudobná jeseň in Vyšný Kubín.