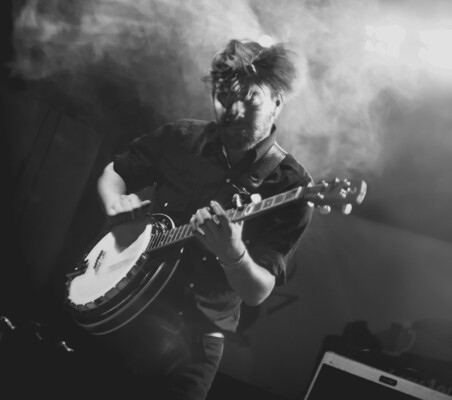 Originally the front man of the country-punk band Kojoti, Holy Fanda debuted with his eponymous talking blues and folk solo album in 2010. Five years later, he returned with the new sound of an urban hillbilly and hardcore Americana of the album Konec cesty, co-produced with Nick Jennings as Holy Fanda & The Reverends, followed up with single I Will Go in 2021 and full new Reverends album Dopisyy v lahvi in 2022. They toured intensively around the Czech Republic and central Europe, and played shows in Portugal , the USA, Canada and Brazil. As an experienced multi-instrumentalist, Fanda is also a sought-after live and studio guest musician. His many guest appearances with well established bands (Mňága a Žďorp, Bonus, Wild Tides, Jarda Svoboda, Neočekávaný dýchánek, etc.) led him from small clubs and alternative festival stages to sold-out venues and appearing in front of 3000 people or more. But his chief pleasure is still writing songs, creating new sound, and playing live for anyone who want to listen, for which he is grateful from the bottom of his heart (and from the bottom of every glass you can drink with him).