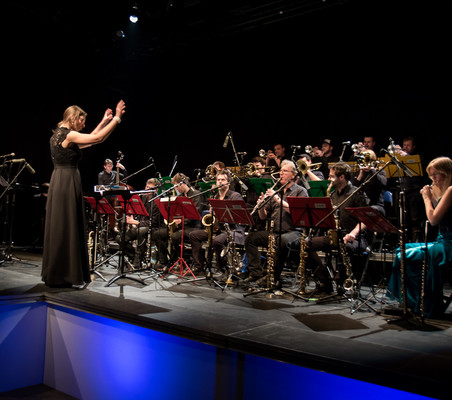 The Big Band Concept Art Orchestra has a long history. It was formed in 2010 at the Jazz Academy in Katowice, Poland. The band used to consist of the former students of the jazz department, where several Czech and Slovak players were studying at the time. The artistic director of the orchestra was the famous American conductor and composer Ed Partyka, who at that time worked in Katowice as an external professor. From this collaboration, the album Concept Art Orchestra Katowice was recorded in 2010  reflecting several original compositions of the students.

Two years later, the big band’s collaboration with Ed Partyka was resumed. By the request of Czech Radio, the album BigBandTronics was recorded and released in 2012. The acoustic sound of a big band is mixed while using electronic effects of the German duo NuBox (Alois Kott, Peter Eisold). The line-up of the big band on this record is almost identical to today’s form of the orchestra.

The following year, the Concept Art Orchestra presented Pictures from an Exhibition by M. P. Mussorgsky in a jazz arrangement by Jan Jirucha Jr.

In 2014, Štěpánka Balcarová, a trumpet player who went through the entire history of the orchestra, took over the leadership of the big band. Together with other five composers of her generation she founded the composer group The Prague Six, whose members now compose for the big band. In 2015, the album Concept Art Orchestra – The Prague Six was released with compositions by these six young Czech composers – Štěpánka Balcarová, Martin Brunner, Jan Jirucha, Vít Křišťan, Luboš Soukup and Tomáš Sýkora. The album was awarded by the prestige Český Anděl (Czech Angel) in Jazz category and became the best jazz album of 2015 according to the members of the academy.

In 2018, the orchestra released the Christmas album Vánoce dospělých featuring Czech carols in special jazz arrangements, as well as original Christmas songs or set-to-music poems by Frána Šrámek and Jan Skácel by the composers of The Prague Six. Singers Dan Bárta, Milan Cimfe and Markéta Foukalová contributed to the album as guests. The album was nominated for the Ceny Anděl 2018 in the jazz category.

Album 100 YEARS is so far the last record of the Concept Art Orchestra from 2020. It is an extensive suite by the composers of The Prague Six. The suite was created as a reminder of the centenary of the founding of the Czechoslovak Republic and consists of six parts, in which the authors deal with various periods in the history of our country. This album was also nominated for the Ceny Anděl 2020 in the jazz category.