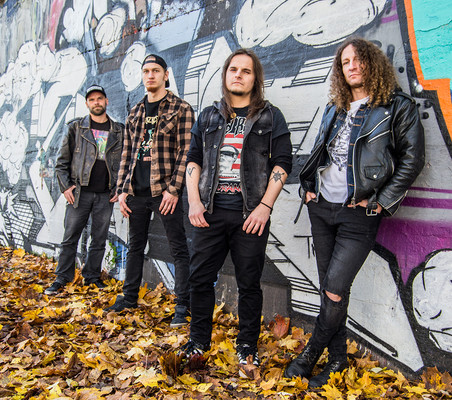 The band was formed in Trutnov, Czech Republic, in 2005. Tomas Skorepa (guitar, vocal), Jan Erben (bass) and Jakub Vaclav (drums) - This triplet of young and passionate metalheads have started to rehearse covers of their favourite bands such as Black Sabbath, Judas Priest, Metallica or Slayer. Spot of the second guitarist was filled by Josef Valkoun the year after. At that time they had composed some of the first own songs and slowly took to the stages of underground parties and local clubs.

When 2009 rolled in, they decided to go to the studio. The result of that session was their first EP called “Disease Inside“. Next year brought crazy and memorable story that happened at Obscene Extreme Festival. Spike Cassidy, the guitarist of american hardcore punk/ crossover thrash pioneers and headliners of the event - D.R.I., wasn’t able to perform due to serious health issues. Skorepa was picked as a replacement and played the full show with them, just after one busy day of rehearsing.

That helped Exorcizphobia to get more popular on the czech metal scene, so they started to appear on the more prestigious actions. Opening for Wehrmacht, Bonded By Blood or Lazarus A.D. is definitely worth a mention. Release of their first full-lenght record “Something Is Wrong“ in 2012 also meant the end of the original lineup era.
Drummer Martin Sotola joins the group in the fall of 2012 and preparation of new songs has begun. The split LP with Lahar from 2013 found the band in a good shape and was highly rated by czech press (winner of The Britva Awards – Mini/Split category), but got attention abroad as well.

Between the years 2013 – 2015 they played decent amount of the shows all around Czechia and Slovakia, including big summer festivals and shared the stage with many legends such as Exodus, Voivod, D.R.I., M.O.D. or Artillery.
Skorepa was also live guitarist of french/canadian E-Force (Eric Forrest, ex- Voivod) simultaneously. He played about 80 concerts all around the Europe with them.
2016 brought another split LP ( with Kaar and Catastrofy), but also another lineup changes. Valkoun and Sotola left the band and were replaced by Ondra Sima (lead guitar) and Filip Kudrna (drums). New pieces of the puzzle fit well and band is even more active about live shows. Next year they experienced present peak, when joined the british grindcore pioneers Napalm Death on their tour over Czech Republic.
After two split albums there was about to time to come out with another full-lenght. Expected by many, LP “About Us Without Us“ was released by Support Underground in the spring of 2018 and was followed by successful european tour. Rock'n'roll lifestyle and intense touring took the tax. Former member Erben, followed by Kudrna in 2019, parting the ways with the band.
Experienced bass player Ales Kostka and young talented drummer Tomas Kejkrt fulfilled the spot outstandingly. Good chemistry of the finally estabilished band is represented by new album “Digitotality“, which was released on November 6th 2020. “Digitotality“ is the bands proudest work to date and receiving positive feedback currently. Exorcizphobia can't wait to rockin' out on the road again, presenting new stuff and bringin' their high energetic thrash to the audience.