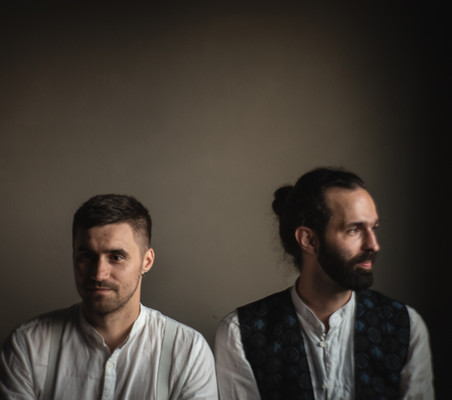 The wide-ranging concept of jazz, its fascination with rhythmic sequences and abstract vocals, experimentation and the constantly search for new sounds, as well as the fusion of cultures, is the gist of Zabelov Group’s approach to music and its presentation. Apart from live instruments, the duo uses synthesisers and other effects. But the key musical elements are the continuous spontaneity on stage and the shaping of momentary moods. Duo Jan Šikl and Roman Zabelov have been on the scene since 2012. The Czech composer and multi-instrumentalist, Šikl, graduated from Prague Conservatory. In addition to playing drums and trumpet in Zabelov Group and the band, Korjen, he writes music for the National Theatre, Czech Radio, the Spitfire Company, and frequently cooperates with the Orchestra Berg. Roman Zabelov comes from a small village, Zhilitchi, in Belarus.

In the family tradition, he learned to play accordion – his grandfather was a self-taught musician, his father and his two older brothers are professional accordion players. Zabelov has been a student of music in Prague since 2010. He notably enlivens the musical production of Zabelov Group with his ethereal voice. The Zabelov Group first captured their live performance on a home-recording titled 40 000 in 2012. Their following live album, Secret Sessions, was made in 2014. Last autumn Minority Records released their first studio recording named Eg. The album, moreover, contains passages of “wild sound” recorded outside the studio: the sound of a church organ as well as of various guests, including a highly esteemed Czech double bass player, Jaromír Honzák. What started as a feat of acoustic purism gradually became complex cinematic music interspersed with sound samples and acoustic instruments boosted by electronic devices. “In our work various tendencies started getting layered on top of each other. Discovering the sound possibilities of a modulated accordion brings us to ambient music as well to strict grooves. We are interested in fusing the abstract compositions with the narrative of spoken words and sampled wild sounds. We discover our potential as instrumentalists and at the same time we enjoy the possibilities of studio post-production. I don’t know if we are going to go for the same synthesis with our next record, but with the ‘Eg‘ album we may have interlinked all the existing layers,“ says Jan Šikl about the Eg album. Members of the Zabelov Group are, among other things, also the authors of theatre and ballet music. Last year they performed at the Czech Music Crossroads and Nouvelle Prague showcases. Also, they were selected for the Ines Talents 2018 program and at the end of January 2019 they are off to the MENT Ljubljana showcase festival.